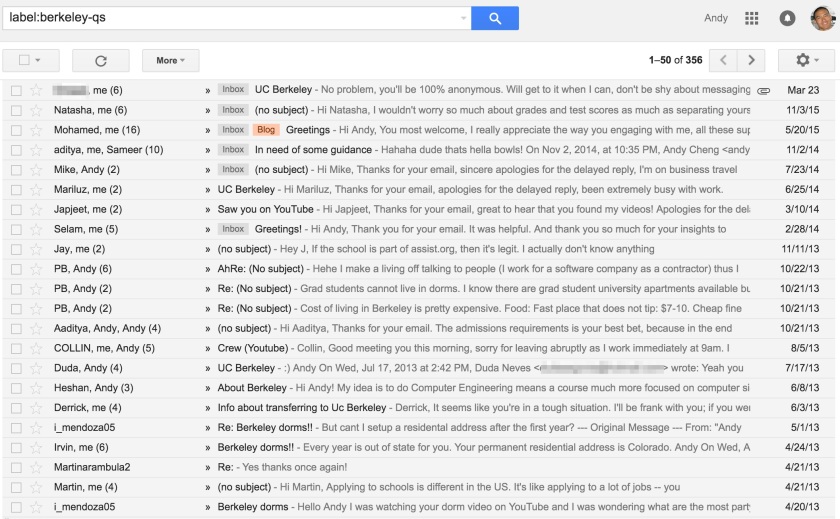 Several years ago I made a vlog series about my alma mater UC Berkeley. One of videos showed what living in the dorms was like (no shame).

Since then, Berkeley-related questions are amongst the most popular emails I get from prospective students. I found myself answering many similar questions from people not just across the United States, but also from all over the world.

How’d you get accepted? What did you have to do? Can you tell me my chances? How do I compare to others?

So how do you get into Berkeley?

I don’t know. I honestly don’t know. The best source is through Berkeley’s own website, and they say it’s through a “holistic” process. If there was a set criteria, then all you’d need to do is meet that criteria to get the offer.

Knowing this, I can only speculate by using myself and other students/alumni as case studies.

So how did I get into Berkeley?

In elementary school and middle school, I fit the typical first generation, overachieving Asian American kid who was good at math and science. I got straight As in every subject except English and was two years ahead in math by the time I was in high school. I took trigonometry as a freshman and calculus as a sophomore.

At that time I didn’t think about college much. I was addicted to World of Warcraft and used it to escape from every day stressors. I also stopped caring about grades. I once wrote my answers to an AP Art History test in Chinese, and good ‘ol Mrs. Creole asked why I didn’t take her class seriously. I got a D for the semester, which is better than my grades in some other classes.

I stepped it up after high school. I didn’t bother applying to four-year universities and went to a community college. Two years later, I attempted transferring. I failed and blogged my thoughts — ahh the memories (and such sulky writing)!

Following the rejection, I stepped up with extracurricular activities: went sailing in another country, tutored writing in college, interned for a politician, and learned a cultural dance. I attempted to transfer again and succeeded that year. I blogged my thoughts again (notice a trend here?) and ultimately enrolled in Berkeley.

How much did it cost? Should you live in dorms or not?

As a California resident, I was under in-state tuition. Students pay per semester, so you can take unlimited classes as it fit your schedule (the cost is the same whether you take 1, 4, or 8 classes). Tuition prices have increased, but it cost around $6,000 per semester in 2012. I received financial aid and scholarships and didn’t pay for any tuition.

Out-of-state and international student tuition is costly at nearly $40,000 per year. No real way around this, and financial aid options are very limited to non-California residents.

On-campus housing varies depending on whether you live in a single, double, triple, suite, or apartment. It cost about $14,000 to live in a double for one year. I subsequently rented a 1-bedroom apartment that cost $1,420 per month. My apartment-mate took the room while I transformed the living room into a second bedroom. We split the cost in half. ($1,420 * 12)/2 = $8,520, not including electricity and internet. Compare this with living in the dorms, it’s typically much more affordable finding your own housing.

Despite this, I highly recommend living in co-ed dorms for one year. You will likely become best friends with the people on your floor.

Test scores, GPA, and other metrics?

I don’t know, but you should try to get as high as you can. Most of my fellow schoolmates had SAT scores between 2,100-2,400, which is close to the average student profile. Even then, scores aren’t end-all be-all.

One of the smartest guys I know, who was top 4% of his graduating class, had a 3.85 GPA in Mollecular & Cell Biology (a popular pre-med major), was accepted into Berkeley with a 1,600 SAT score. I only took the SATs once and scored around 1,700. I don’t remember my high school GPA.

If you’re a musician, that’s cool. If you’re an athlete, that’s cool too. If you built or invented something, great. If you help others in any sort of way, awesome.

Anything is better than nothing.

Why does going to Berkeley matter?

Regardless of whether you attend Berkeley or any other school, you’ll experience the same manifest content: you’ll take a variety of classes with different students, live near campus with similar-aged people, learn to be more independent and responsible, and try to figure out what comes next. Any school can offer this.

If there are unique reasons why you want to go to Berkeley, then great! There are definite advantages, and I wrote my thoughts here on the advantages of an elite education — though written years ago, I still abide by these beliefs. Be forewarned, however, that you may fall susceptible to The Disadvantages of an Elite Education.

Why it doesn’t matter that you went to Berkeley — or any other school.

In the end, college is what you make of it. I didn’t put much research into my major at Berkeley and felt miserable in the majority of my classes. That said, I had an absolutely terrific college experience from college rowing, befriending fantastic people, and learning to live away from home (outside my comfort zone).

It also doesn’t really matter what you studied in college. You can realistically learn most college content on your own. Professors mostly teach out of prescribed textbooks that you can just purchase and study on your own. However, the classroom setting produces an environment that encourages learning, debating, and challenging yourself. If you can replicate that environment without paying for college, tough as it may be, then you don’t need a degree.

My work today has nothing to do with what I studied. I’m currently a middle manager at SOLOSHOT #shamelessadvertising #wehiring and am in charge of a budget in excess of $1 million per year. My job skills were learned on the job, through my previous company, through mentors (both on the job and outside of work), and from reading books.

Send me an email, and I’ll reply as promptly as I can!