The dinghy that brought us to the marshlands, with the Pacifico in the background.

I awoke at 8am. We were still alive.

Captain Graham was awake and looked exhausted. He informed me that Alex had fallen asleep during his night watch shift — upon discovering this when he woke up to double check all systems at 4:30am, Captain Graham’s yelled at him and took over. Feeling mostly rejuvenated, I took over and he went off to sleep.

The seas were no longer rough, as we had ventured past the Los Cabos Fault. Still starving from barely eating the previous day, I devoured almost an entire bag of Oreo cookies along with a large glass of milk. Breakfast of champions.

Alex felt better upon waking up. He finally got his sea legs, which meant he was finally adjusting to living on sea. We spent the day fishing, capturing a grand total of nothing.

We finally arrived at the first docking point on the evening of July 9, inside Magdalena Bay. We had been out on sea for 36 hours straight — being close to land felt relieving.

The night of terror resulted in a lot of broken boat parts that required repairing; we would have to spend the next morning fixing some of the damages.

Alex made us dinner, and we rested up.

Rise and shine, time to repair the boat!

The boom vang that Captain Graham had put in place during the night of terror. This was what finally secured the boom in place.

The secondary hook was not safe to connect to the main sheet. Captain Graham instead cut a piece of a heavy line to connect the main sheet to the boom. Despite Captain Graham’s insistence that this was safe, Alex was nervous of a repeat incident. I too recalled feeling nervous about this, wondering whether it would hold up for the remainder of the journey.

The Man-O-War Cove was a small village containing some 200 native Baja Californian inhabitants. Most of their economy revolved around lobster catching. We needed to restock on supplies and bartered with the locals: exchanged some beer, cigars, and Mexican Pesos in exchange for fuel and water. Just like Waterworld, except we weren’t overacting stars.

Yet another amazing thing about the captain: full fluency in Spanish. He did speak with a heavy American accent, but impressive nonetheless.

Remember the broken cockpit area? Controlling everything from the galley was not efficient, so Captain Graham did some ad hoc work on the binnacle. Behold, the new shift and control, made out of space metal parts!

After spending the morning repairing what we could, Alex and I prepared the dinghy for the first time. We had to use a crane to lift the 200-pound miniboat from the front of the sailboat, onto port side. Alex then jumped in, and I hoisted the 70-pound motor down to him. If the motor dropped into the water, all would be lost.

Captain Graham debriefed us on the afternoon plans.

We’re going to go further inland to anchor the Pacifico off of a marshland, then take the dinghy onto shore. We will walk through a quarter-mile strip of sand dunes onto an empty beach that faces the Pacific Ocean.

Instead of spending money on generic souvenirs in gift shops, we will instead collect gigantic sand dollars on this empty beach. Here are large plastic bags for the each of you. The sand dollars will be much more authentic to give to friends and families, as you will have this story to tell!

After sailing further inland for an hour, we anchored the Pacifico. Captain controlled the dinghy, and towards the marshlands and sand dunes we went.

We had to pull the dinghy when we reached the shallow area.

As shown in the first photo of this blog post, we secured the dinghy into the mud… with the water pump. It was a useless maneuver; high tides were approaching in the afternoon, and that hose would not protect the vehicle from washing away. We only had a couple of hours to cross the sand dunes, collect the sand dollars, and get back to the boat, else lose the dinghy. 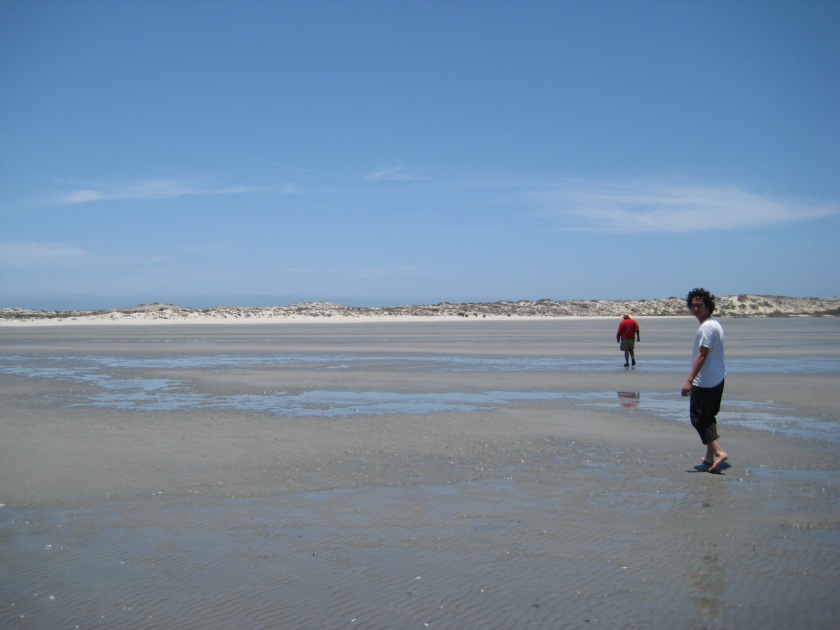 The sand dunes were ahead! Captain Graham wore sandals, while Alex and I were barefoot, thinking that sandals would feel uncomfortable in the sand. We could not have been more wrong. The sand was hot, and broken branches and bushes pricked our soles. Discomfort and pain.

A quarter mile strip was not as easy as it sounded in these conditions. It was also quite hilly, and we were often unable to see the bay nor the Pacific Ocean. 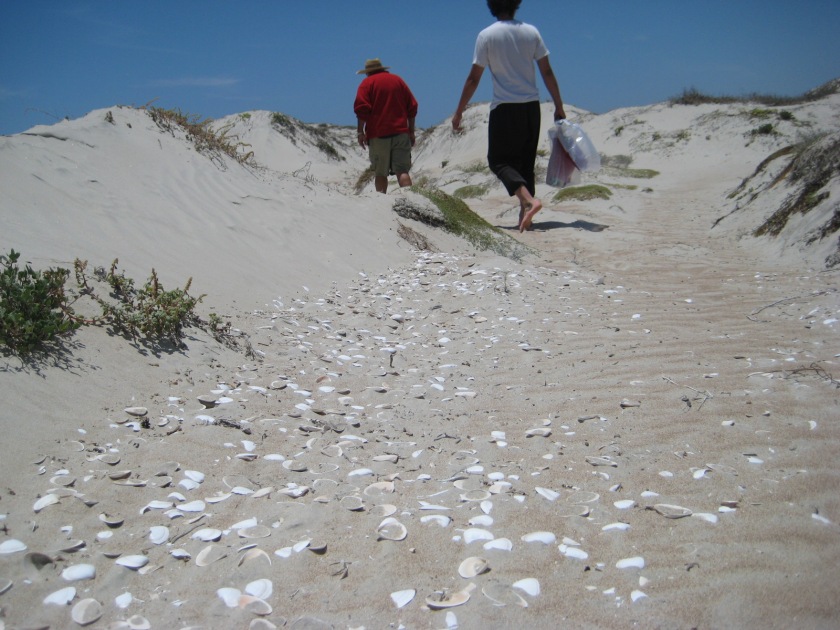 It was bewildering seeing how many shells were in the middle of the dunes. How many hundreds or thousands of years had passed before the ocean levels had submerged to a lower level? Or, how many seagulls chose to hoard their catches in this area? How many other people have trekked through this area? So many questions, so little answers. 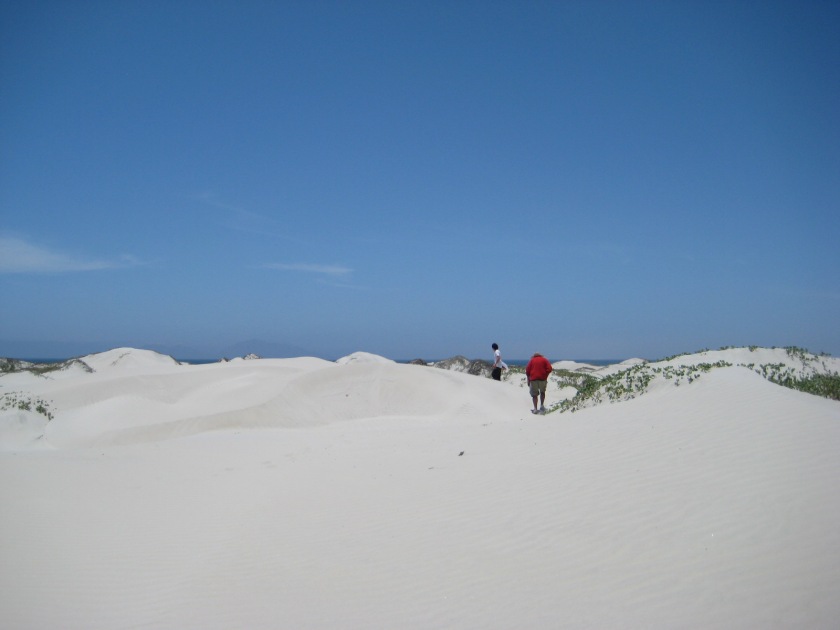 We formed the only footprints in sight, clearly trespassing in this native place. 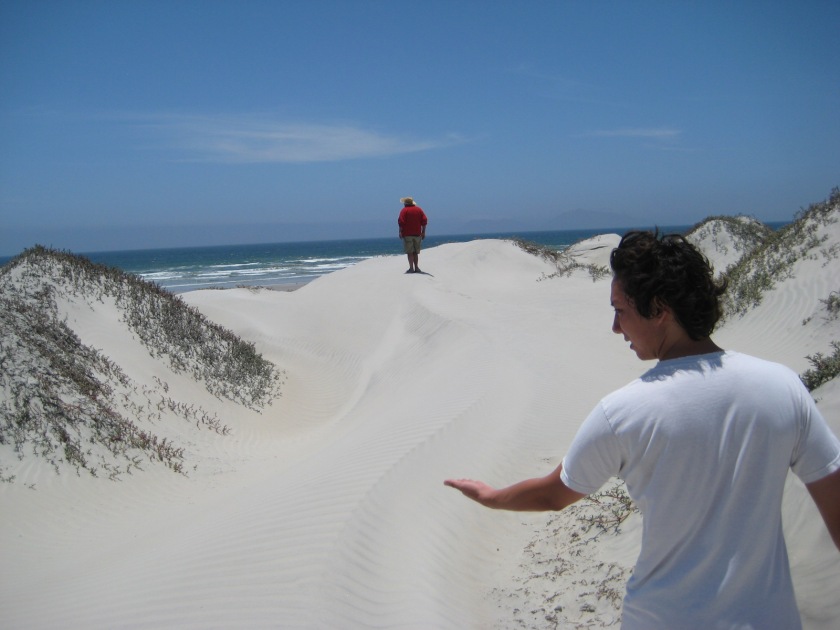 We finally reached the Pacific Ocean, and indeed, there were giant sand dollars everywhere. Hundreds and thousands in sight, most in pristine condition. 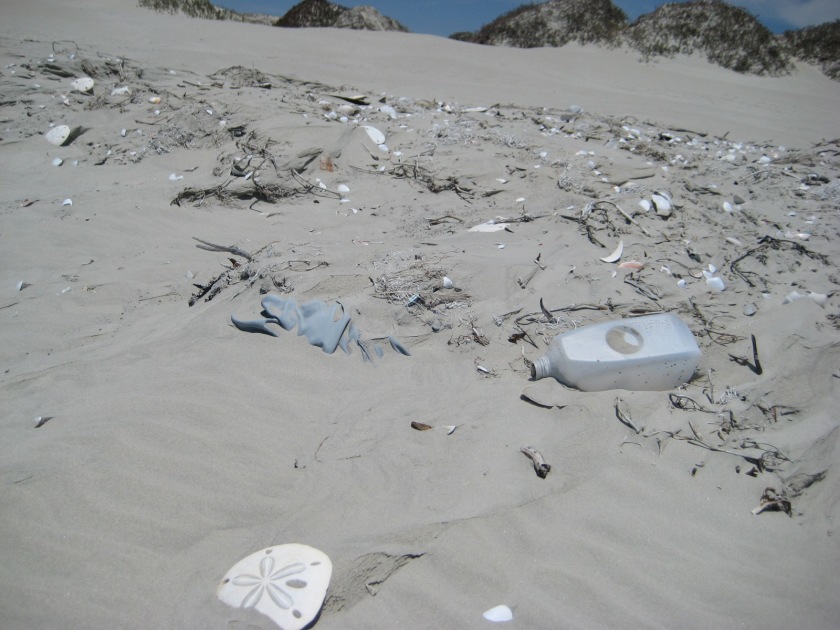 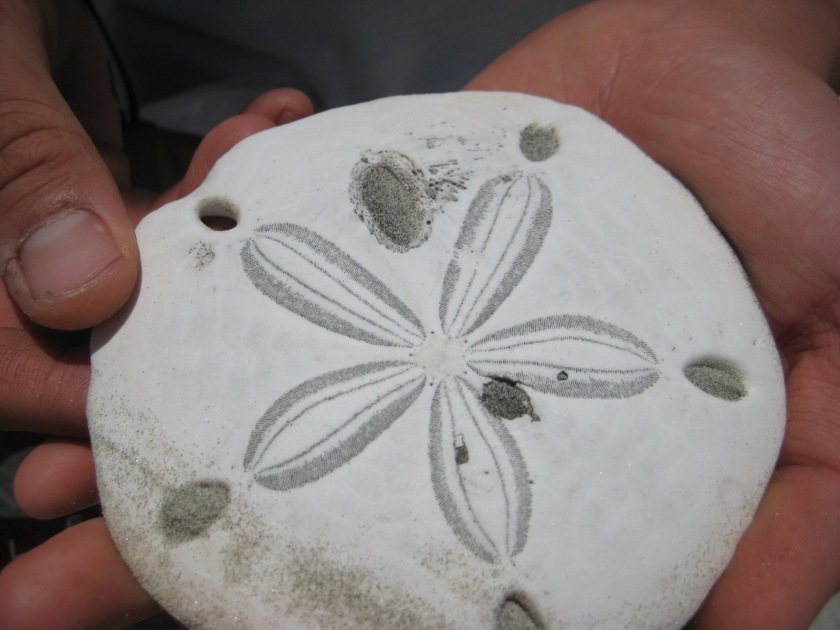 Imagine the sound the of the waves along an impressive beachhead, plus the three of us, and not another hint of human presence. How is that for mood-building?

We spent nearly an hour collecting sand dollars, and our bags were very heavy. I wanted to hop in the water for a swim. However, Captain Graham noted the time:

We need to head back to the Pacifico. It’s getting late in the afternoon, and the high tides should be coming in. If we don’t make it on time, the dinghy will have swept away and we will be in big trouble.

Alex and Andy, you two go on ahead to try to make it. I’ll catch up on my own.

So we sprinted back. I led the way, with Alex approximately 50 meters behind me. I could not see Captain Graham after a few minutes. I hoped that Alex would be able to maintain visual sight of both myself and Captain Graham.

Alex: I can’t find the Captain!

Alex: I CAN’T FIND THE CAPTAIN!

Panic. Pressure. How did we lose him? Why isn’t he returning our shouts? Did he faint? What if he fainted? How are we going to find him through these hilly shrubs and prickly shit everywhere?

I stood in place, waiting for Alex to provide verbal cues. He walked off a hill, and I could no longer see him. The Pacifico wasn’t in sight. I felt #foreveralone.

After a few minutes, I backtracked as well, not ready to accept that I had lost sight of both my companions. Felt more pricks on my feet; blood was drawn; drama king at a record high. Soon, I was able to see the Pacific Ocean again. It was like playing hide and seek, but not fun.

Alex: Andy, can you hear me?

Alex: I found the captain! Go back to the Pacifico as soon as you can! The captain is fine!

I caught a glimpse of the Captain and breathed a huge sigh of relief. Back towards the bay I went. More pricks, more blood, more dramatic thoughts. What had happened? What if the dinghy washed away? Are we going to die? Will I see mom again? #DramaKing #NoShame

It looked like the dinghy was still there. Was it being washed away though? I was too far away and couldn’t tell, so made a final sprint towards the marshlands and inquired my creature friend for the dinghy’s whereabouts. 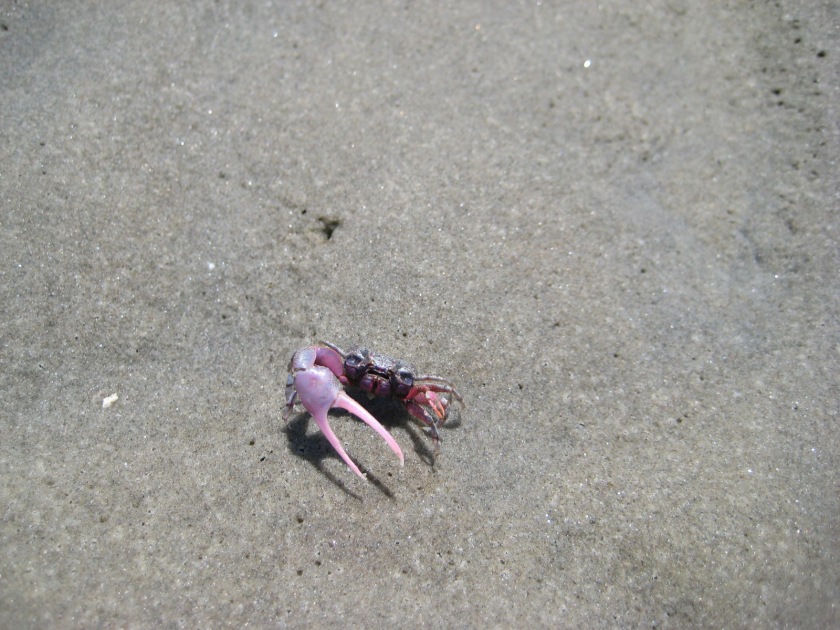 No crabs were harmed in this all-star photoshoot.

Andy: Hey Crabbe (not the Slytherin one), is the dinghy still good?

Crabbe: Yeah it’s still good. Why don’t you take a look yourself? Idiot.

*I gazed towards the dinghy*

Andy: Yeah it’s still there! Thanks Crabbe, you the best!

The waters weren’t even close to the dinghy. High tides never came in… all this pressure for nothing! I put the sand dollars down and finally relaxed — the extra weight had taken a toll on me. From afar, I saw Alex and Captain Graham on a slow incoming approach.

Captain Graham: I was looking at the ground while walking. Carrying the sand dollars on one hand was so heavy, I slowly made a 180 degree turn without noticing! And when I saw the waters without the Pacific/dinghy, I panicked and walked even quicker! Had no idea I was staring at the wrong body of water! It’s a good thing Alex found me.

We laughed in relief. Everyone was safe. We could have possibly nearly died, but didn’t. #DramaKing

We sailed back to Man-O-War Cove to dock for the evening. Because we were one day behind schedule, we planned to wake early to depart at 3:30am.

The sail back down Magdalena Bay was unforgettable. To the west, clouds overtook a mountain. It looked like a continuous avalanche. The movement was endless, and the clouds dissipated as soon as they surpassed the mountain from the west. No amount of pictures could do the sight any justice. 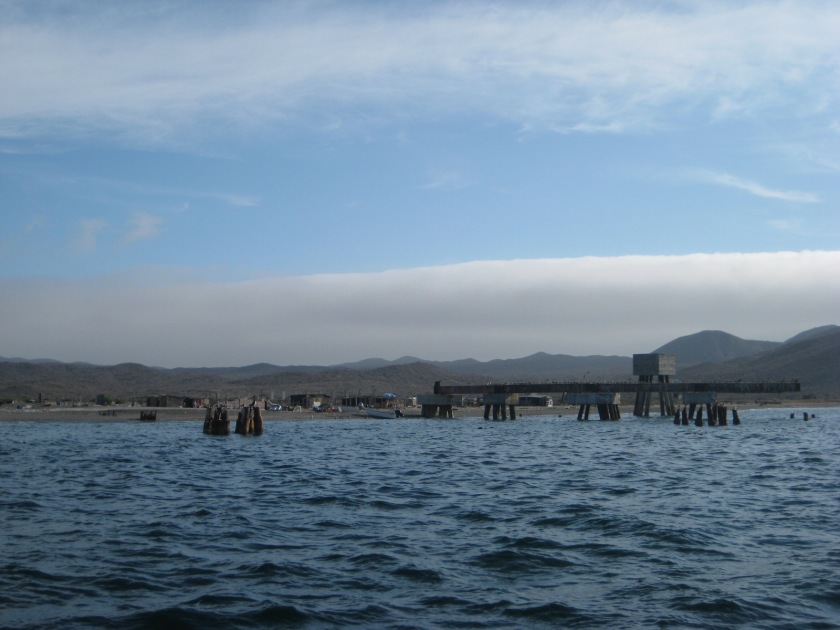 We anchored right next to an abandoned whale harbor. Alex made a delicious spaghetti dinner, and I washed the dishes. While Captain Graham went to sleep, the two of us stargazed. In such a remote area, the milky way band was completely visible. We saw at least a dozen shooting stars. It was an introvert’s dream: the sound of the ocean, the view of the stars, and falling asleep outdoors right there in the cockpit.