The point where the Jialing and Yangzte River (3rd longest river in the world) connect.

I flew to Chongqing on 24 hour notice for a business trip. After a 76-hour work week, I needed to decompress and planned a day-long visit to explore the city.  Since my flight was on such short notice, I did not save Google Maps  onto my phone for offline use. I couldn’t load the map here due to the Great Firewall, and thus only typed in location names onto my phone with the intent of asking locals for directions.

Two coworkers accompanied me on our excursion. On Sunday morning, we rode Line 1 of the subway from Weidianyuan (微电园) to Xiǎoshénzì (小什字). From one end of the subway to another, it only cost us 6 RMB. Incredibly cheap, as $1 USD is $6.8 RMB. 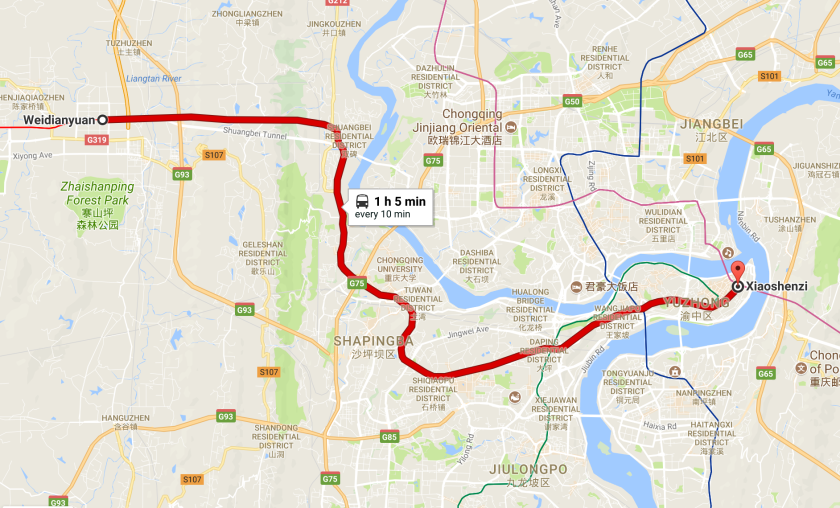 Our first stop was Luohan Temple (罗汉寺). After exiting the subway, we took a random exit onto the ground floor. I was immediately blown away upon seeing the urban environment. It was like stepping out of Embarcadero onto Market Street.

I asked a local couple for directions. They were kind enough to walk us across the street, then point us towards the right direction. Upon turning the corner, we  noticed a cool looking temple. I then asked a woman behind a small stall where the Luohan Temple was, and she replied, “You’re looking at it!” Oops.

After staring at the temple for a few seconds, we walked a few hundred meters towards the People’s Liberation Monument (解放碑). Along the way I kept staring up at the impressive skyscrapers.

The People’s Liberation Monument is in the town square, which is Chongqing’s equivalent of New York’s Time Square. It was built to celebrate WWII victory and used to be the tallest building in the area. When we saw the monument in the center of the plaza, I was more impressed by the panoramic view of buildings that dwarfed it. Signs of modernization were evident in the brand name stores like Dolce & Gabana and an Apple Store (a real one?!).

Right click and open in new tab to see panoramic.

Next up was Hongya Cave (洪崖洞), a hotspot for local tourists to explore eight underground levels of shops, stalls, and restaurants. On the way, we walked by the Chongqing Art Gallery that was unfortunately closed. Nevertheless the architecture was stylish, branding Chinese stamps all over the roof.

After 15 minutes of walking towards the general direction, we arrived at Hongya Cave. Upon entering one of many entrances, we began window shopping. We walked into a hat stall and the Chinese owner smile and said, “Welcome!”

I’m  familiar with negotiating with multi-lingual shop owners in Beijing and was prepared to hear her speak English impressively. To my surprise, she reverted to Mandarin and I ended up negotiating the price of hat with her on behalf of my Indian-American coworker. It only became apparent later that Chongqing does not have bustling foreign tourism like the Chinese coastal megacities. Therefore the flea market owners never learned to speak any other languages.

Upon walking out of a different exit, we stood upon a majestic hillside lush with a waterfall and green-dominant foliage.

The path diverged many times as we  trekked up and down stone steps. We were able to walk behind the waterfall to get a good view of the Wulidian Residential District.

But that’s not the best part. In my favorite view of the entire day, we had the opportunity to see a panoramic view of the Jialing River, including the point where it merges with the Yangtze River (the longest river in China, and 3rd longest in the world)!

Right click and open in new tab to see panoramic.

The water looks murky and dirty, I know. But reading about the Yangzte River as a kid, all the folklore surrounding it, and being able to finally see it is… no words can describe it. Coupled by the city skyline and the rare sunny day (this region only has 1/4 days per year where the sun is visible), I stood here for five minutes just absorbing it all.

Next up was the People’s Assembly Hall (人民大禮堂) and the Three Gorges Museum (三峡博物馆). We hailed a taxi that cost 10 RMB and arrived a few minutes later. The hall was built in 1954 and serves as a meeting place for the municipal politicians.

It cost us 10 RMB to enter, which quite frankly was a waste of time. The huge auditorium looks like the inside of the US Capitol with auditorium style seats pointed at center stage. The ceiling was mighty tall and hollow. A bunch of locals were taking naps on the chairs. Seemed like a place for locals to escape the midday heat was all.

On the other hand, the Three Gorges Museum was free and we spent quite some time there. We learned about the history of the Three Gorges, how the dam was built, and the museum’s mission to preserve the culture and record the displacement of the million migrants as a result of the dam. Fascinating comparing the descriptions to international sentiments, as the displacement of the people was very controversial. No sense of controversy inside the museum, brought to you by the People’s Republic of China!

The museum also housed a few art galleries, and we walked through the Chongqing during the WWII era, stone sculptures, and scroll art exhibition halls.

After the museum, we took a taxi to Cíqìkǒu (磁器口). The taxi driver broke the ice by pointing out a subway driving through a large apartment complex. There was actually a huge hole in the middle floors of an apartment complex, with train tracks running through it. This sight was perplexing, and is something that will never be approved in the US.

The taxi driver was quite humbling. She shared about Chongqing history, then about herself. She’s native to the area and has seen it change a lot, credits Bo Xilai for much of the modernization, and said that many roads, including the one we were driving on, were not here a few years ago. She mentioned visiting Beijing two years ago on a tour, and that it was her lifelong dream to visit, but was ultimately disappointed at how rude people were. She said that Beijing and Shanghai people seem to look down on Chongqing because it’s so poor, but that living here has its perks, kind people amongst one of them.

It’s true. Throughout the day, when asking for directions, I had mentally prepared to deal with rude people. Everyone was so friendly, even the shop owners who helped even if didn’t give them business. The taxi drivers were all honest and used the meter. I felt safe; even though we only saw about 20 foreigners throughout the entire day (most inside the museum), we never felt threatened. Besides some people looking at us (i.e. my non-Chinese looking coworkers) in fascination, nobody paid us any attention.

Alas, we reached our destination and paid 32 RMB for the ride. Ciqikou is an old town with seemingly endless shops, small eats, and cafes. I was (happily) suckered into a store to drink some tea, and was constantly heckled to buy the product. I talked my way out of it by showing my US credit card, which the local shop could not use.

The town had unique architecture and was incredibly crowded. 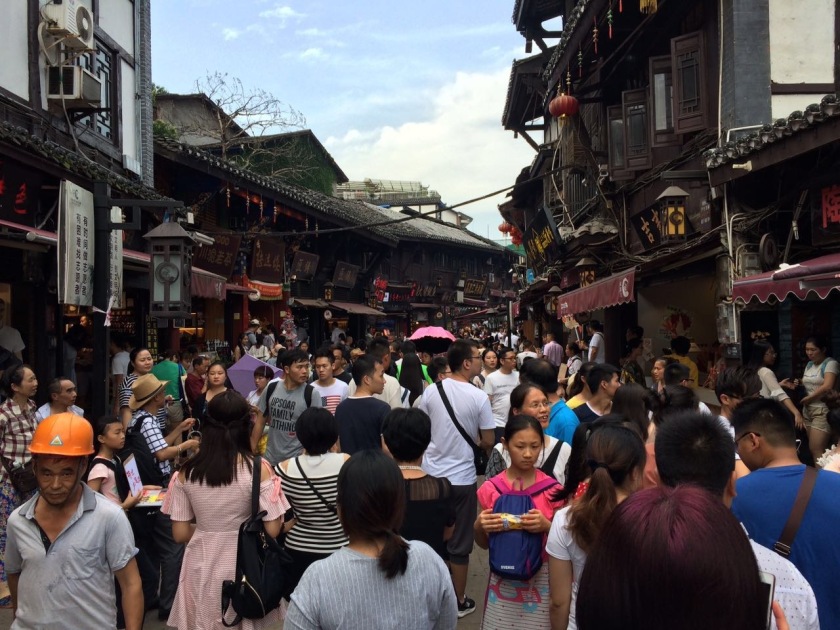 It’s a shame we didn’t stay here longer. It was already 4 PM; we had skipped lunch and were starving. Instead of eating in the town, we rode the subway to University Town to eat an Indian restaurant.

In the last pleasant surprise of the day, I learned that Chongqing has an Indian community of  ~500, comprising mostly of medical students at Chongqing Medical University. The head cook of the restaurant is also from India, had been a chef in Moscow, but moved here for the job. He cooked us a customized set of dishes, thanks to our Indian coworker’s charm. In the middle of our dinner, about 15 Indians from the university sat next to us and made introductions. Their English was spectacular.

Excluding dinner, the cost of all this fun was about 55 RMB per person. That’s $8 USD. California is truly privileged to command purchasing power that is insanely higher than most other countries. Imagine a Chongqing resident wishing to visit California and paying $50 taxi from LA to OC. Or eating a dinner that costs $20. The scales are completely different.

This was a humbling day, and I’m incredibly grateful for being able to experience a part of China that’s mostly overlooked!

One thought on “Chongqing: exploring the midwest of China.”