On July 11, I visited the YouTube HQ in San Bruno. I was invited to be a panelist speaker for a Taiwanese American Professionals (TAP) – San Francisco event. The panel catered towards audience members who were considering careers in Taiwan, and I shared my tidbit. 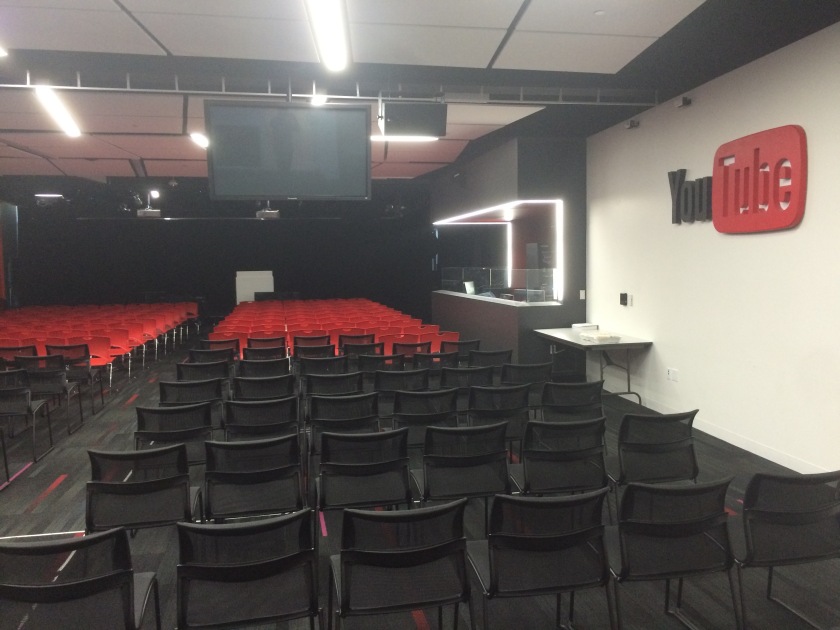 Afterward, I received a complementary tour of the campus!

You must understand the significance of this. I’ve half-seriously ran a YouTube channel for almost ten years, compiling over 500 subscribers and 300,000 video views (basically nothing). Some people cannot live without TV, some cannot live with Facebook. I cannot live without YouTube. I have a sincere appreciation towards cinematography, so you could imagine the nerd chills running down my spine at this time.

The front of the main campus (yes, there are two; YouTube/Google owns a chunk of land) consists of a huge seating area. Security prevents any unauthorized personnel to cross through all the locked doors. There are three floors, and two more underground floors of pure awesomeness.

By awesomeness, I’m talking about a full fledged gym. Towel service, shower rooms, a pool, everything.

Dining commons and fully-stocked kitchens on every floor.

The themed chairs, oh the themes!

This was floor five of the second campus and was based on a basketball theme.

So there was a basketball rim for employees to use in their leisure.

There are massage stations that offer employees a certain number of free massages per month; any additional ones will cost some money. There are nap rooms, many gaming rooms (where they explicitly prohibit work), an open bar (yes, alcoholic drinks), and more.

There large outdoor patio consists of a basketball court, eating areas, and a landscaped area with trees and hammocks to nap on.

I don’t mean to paint the campus as heaven, even though it basically is. YouTube is still a business, and employees are meant to produce value. Every floor has the office area. We walked through hundreds of work stations, the standard-issue Google package: automated standing desks, open seating arrangement, natural lightning, top-of-the-line electronics kit. The other amenities merely reinforce a “work hard, play hard” mentality, consistent with Schmidt’s so-called vision.

It makes sense though, right? Provide employees with everything needed to maximize their throughput. If you’re constantly sifting around your seat because you wish to stand, you’re going to be less productive and less focused — here’s a standing desk that you can toggle between sitting and standing. If you need a 15 minute break before resuming 100% productivity, isn’t it better to take that nap or get that massage versus being forced to stay at your desk, pretending to do work while operating at 65% productivity for the remainder of the day? Again, Schmidt’s vision at work.

Two more fascinating things that YouTube has done: job creation and market disruption. It’s amazing how this platform has empowered folks to compete against the previous media giant: TV and movies. Folks who were previously “undiscovered” from Hollywood were able to make it big on the platform, on their own, with their own budgets. They’re full time YouTube Partners making six figures or millions a year doing what they love! On the other hand, directors who didn’t have a budget for full-feature films are able to rely on revenue from their paid audience (ads) or from donations (crowdfunding), such as FreddieW’s Video Game High School series. Speaking of that, their poster is featured on the campus.

Basically, YouTube rocks, and I’m grateful to have witnessed the place that made it all happen.